Our past several shows on Reveal are available for you to listen to over at Mixcloud!  Five shows are posted and show #6 will go up in a few days! 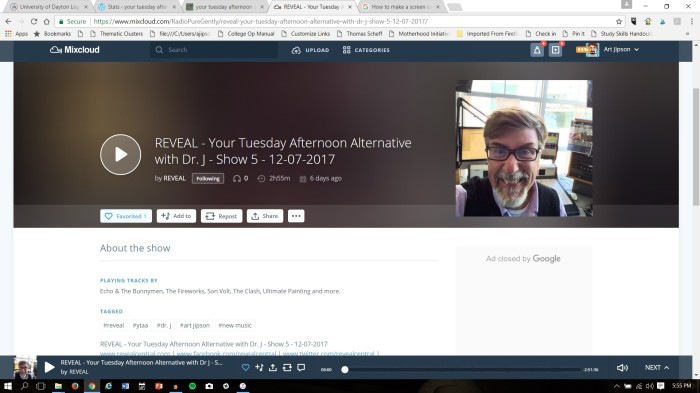 Hey! Did you know that Reveal radio is now on TuneIn?  You can listen there if that’s your sort of thing.  YTAA is on every Wednesday from 2-5pm!  And there are plenty of other great shows on Reveal too! Do not worry, we still have a show on WUDR every Tuesday from 3-6pm where you can hear an all new Your Tuesday Afternoon Alternative!

Hey, we pass no judgement on how you find your music.  We are just here to help.

To listen to Reveal there are no many ways for how you can do it….
Live365 page: https://live365.com/station/a53028
Reveal Website: http://www.revealcentral.com/listenchat/

The fine folks at Reveal Radio have created a Mixcloud that allows you to listen to past Your Tuesday Afternoon Alternative shows!  New shows will be posted a few days after they air on Wednesdays from 2-5pm on RevealCentral.com.  And don’t forget the old show time Tuesday 3-6pm on WUDR.

Several folks have asked for our set lists for the new Wednesday afternoon edition of Your Tuesday Afternoon Alternative on Reveal.  So, who are we to stand in the way of progress, right?  The document link takes you to the July 5, 2017 program set list.

Remember that if you have any comments or suggestions about the set lists for the Tuesday OR Wednesday edition of the program, you can reach us at gmail and twitter at drjytaa.  Please do send thoughts our way!  If you have music you would like us to consider just contact us via our social media!  So long as you all see value in these set lists, we will share them with you all!  Cheers!

We are continuously searching for exciting and varied music for Your Tuesday Afternoon Alternative and would like to encourage bands, poets, musicians, songwriters, storytellers and artists across genres to consider contacting us for possible broadcast on future episodes of YTAA.

Social media is the easiest way to contact us.  You can reach us at drjytaa on twitter and drjytaa using gmail and in our Your Tuesday Afternoon Alternative radio page and group page on Facebook.

If you wish to send a CD rather than a file, please send items to:

It would be most helpful if you included any information on touring and show plans, contact information and social media, and any interesting stories about the project and the musicians involved.  Please note any profanity in your correspondence and know that on WUDR we must abide by all FCC regulations; however, on Reveal we have far greater latitude on what can be played on an Internet stream.

Dr. J is now part of the Reveal Radio family!  Your Tuesday Afternoon Alternative will do an Internet radio program every Wednesday from 2-5pm Eastern Time zone followed by our good friend Gretchen Kelly’s ‘In The Rough’ radio show!  What could be more punk than a Tuesday show on Wednesday?  We could not be happier about collaborating with an effort focused on music in all genres, formats and approaches.

Reveal Radio began in 2012 as a radio show created by musician. Producer, Sound Technician Rob Puricelli.  From Rob’s efforts to connect listeners to interesting, fun and new music, Radio Pure Gently was born.  RPG’s mission was to embrace music in all of its forms.  The approach was simple: recognize the influence of the classic performers in popular music while encouraging exploration of new music across genres.

From RPG, Reveal launched in 2017.  The focus is on music.  Period.  Presenters create the playlists not any corporate behemoth as is all too common.  The DJs play what interests and moves them.  At Reveal, there are presenters and hosts with varied musical ideas from all around the world broadcasting 24/7 online because they are committed to exploring music.  No agendas, which will be refreshing, right?

Reveal’s more well-known shows include Friday Night Live with Rob Puricelli, Synthetix Sundays with Marko Maric, Soiree 80s, The Diamond Field Radio Show with Andy Diamond, The Things That Dreams Are Made of with Daniel X. Belasco as well as the regular Thursday show.

You can now hear YTAA on Tuesdays at WUDR (online & 99.5/98.1fm) from 3-6pm Eastern and a freewheeling fun online version on Wednesdays from 2-5pm on Reveal.  Join us for one show or heck, maybe both.  See you on Tuesdays and Wednesdays!