Every year we ask some of our music friends to share some of their thoughts on some of the albums/singles that were released in the past year.

Our good friend, fellow Connells fan, thoughtful social media user, and one of the most ardent new music fans Rob Perry agreed to share his thoughts about new music from the past year.

2022, for me, has been a year in that I got to get back out into the live music scene a bit and enjoy a lot of great music released by my favorite artists and some new ones, too.  I saw wildly enthusiastic live shows by Superchunk and Built To Spill (both with new albums this year) and more subdued ones like Waxahatchee and Sharon Silva.

As far as this year’s album releases go, here are five of my favorites.  All are records that I find easy to put on the turntable and enjoy from front to back.

Archers of Loaf – Reason in Decline … their first new album in over two decades was highly anticipated by long-time fans. But this record doesn’t have the signature noisy gnarl of the early releases. This is a band, seemingly now with a different sense of purpose. When I listen to this album I hear impeccably crafted songs, still distorted but looking more positively at our ever-changing world.

Tess Parks – And Those Who Were Seen Dancing … Here’s another record that’s been a long time coming. When released, it had been almost 10 years since Park’s last album “Blood Hot”. On this one, her ethereal vocals, mixed with sonic influences of Oasis, Patti Smith, and Primal Scream provide a nicely wrapped feeling of 90s nostalgia. Drop the needle on this and let your psyche explore it all.

Favorite track: “Do You Pray?“

Rolling Blackouts Coastal Fever – Endless Rooms … This is the group’s third long play and it highlights their consistency and creative growth. What I love about this band and album is the incredible combination of songwriting skill layered intricately into their three-guitar interplay. There seems to be an ego-free vibe among the six-stringers Joe Russo, Joe White, and Fran Keaney. While this release doesn’t use the same template as the band’s debut “Hope Downs” it does expand on the definition of what a great Rolling Blackouts Coastal Fever record can be.

Favorite track: “Open Up Your Window”

Yumi Zouma – Present Tense … The New Zealand quartet’s fourth album is a subtle shift from their previous records. While it’s still shimmering Dream Pop, this release hints at moving a bit towards mid-80s Fleetwood Mac or Hall & Oates. The band has done a great job of weaving a variety of textures into the songs on this record. “Present Tense” has a little something for almost everyone and listening will most certainly augment your mood.

Spoon – Lucifer on the Sofa … In February, one of my favorite bands “finally” released their latest record after five long years. As their music always seems to be evolving, I wasn’t sure what the signature album sound might be. For me, the edgy-riffed “The Hardest Cut” definitely sets the tone but all of the tunes have a roughhewn and sparsely produced feel. The record sounds like it could have been recorded live in your living room. As usual from Britt Daniel, there’s excellent songwriting and a nice mix of tempo.

We want to express our gratitude to Rob for taking the time to write one of these reviews. 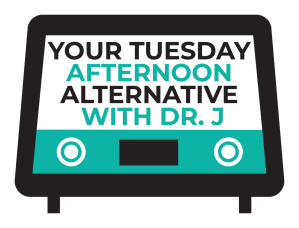 The annual look back at the previous year in music is one of our favorite shows to do! This year Tom Gilliam joins Dr. J and Flower to play and discuss some of the best local, indie, alternative, folk, Americana, alt-country and more that came out in 2018!

We give thanks for great independent music by playing an assortment of local, Dayton, and indie songs! What songs have been so powerful on you that you cannot imagine your world without them?

During the show contribute to the discussion by giving us a call 937-229-2774 or a tweet for drjwudr with the songs that were released in 2018 that matter to you.

Many great songs and bands from 2013 can be found profiled on the terrific Atlas and the Anchor site http://ow.ly/rDBCM

Join us in a few hours on WUDR!

This week we will discuss several of our favorite songs and albums from this past year. What did you like? What did you love? Join us from 3-6pm on December 10th on WUDR with your top ten lists for albums, songs, and anything else that you care to make a top ten list about.

Brad Denson, Khrys Blank and Mike Bisigg with Dr J today! Go to the Gem City Mardi Gras Threauxdown on February 25th at @thebrightsidedayton! #ytaa #yourtuesdayafternoonalternative #radio #radioguests #gemcity #gemcitythreauxdown #Dayton #DaytonMusic #DaytonMusicScene #mardigrascomestodayton
Ready for the guests in the studio at WUDR Flyer Radio for another Your Tuesday Afternoon Alternative! #ytaa #yourtuesdayafternoonalternative #radio #wudrflyerradio @wudr99.5
Dr. J in the WUDR Flyer Radio studio with his Mayflies USA T-shirt!
The studio lonely after a show
The buttons for guest microphones in the dark.