In the family of great shows, this one will be amazing. Fresh off the heels of an amazing Record Store Day and right before our pal and all around amazing dude Andy Smith stops in to take over Your Tuesday Afternoon Alternative! We have a preview of the 1World Celebration at ArtStreet this Friday! Interviews, special guests, music from The Motel Beds, Jayne Sachs, Al Holbrook, Oh Condor, and Orange Willard and of course, some special new music that was hand selected by Mrs Dr. J just for you!

Join us as we gear up for the community building through music event of the season!

Did we mention we have free music to give away too? Tuesday will be terrific! Join us from 3-6pm on WUDR! You can listen on 99.5 and 98.1 fm or via the UD Mobile App or at wudr.udayton.edu! 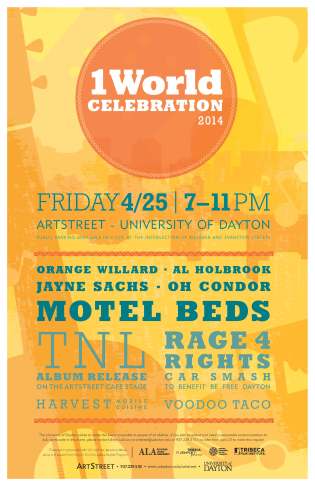 On April 25th from 7 to 11pm — several great Dayton bands, The Motel Beds, Oh Condor, Al Holbrook, Jayne Sachs, and Orange Willard will play at the ArtStreet Complex of the University of Dayton! We are celebrating this terrific show by playing music from all of these bands! You can also expect tons of new music.

You can also expect some music from The Broken Lights, SHRUG, Smug Brothers, King Elk, Built to Spill, The Pastels, Old 97’s, Manchester Orchestra, The Capsules, Ex Hex, Real Estate and Absinthe Junk. In case all of this was not fun enough — we have brand new music from Sad Cadillac – they just played out at The Canal Public House! What a show!

Yeah, whew… But wait because if all of this was not enough we have a preview of some new music from Andy Smith‘s new project, Me Time!

Me Time is playing out this coming Friday with the always amazing Human Cannonball — get the info here: http://ow.ly/vuFI4

So, join Dr. J and Mrs. Dr. J as we preview the upcoming

1World show. Join us as we play some great music from The MotelBeds, Oh Condor, Al Holbrook, Jayne Sachs, and Orange Willard and discuss the 1World event on April 25th! This event is not only awesome — its free! Remember you can listen on wudr.udayton.edu or via the new UD Mobile App or those ol’ radio waves at 99.5 and 98.1fm in Dayton! You can get the UD Mobile App here!

Dayton’s own Me & Mountains are not only a great live band that is part of an exploding local music scene but they are also rather savvy business guys.      Normally the path to releasing music is wrought with many logistical challenges, delays, and processing problems.   And while we are not talking the length of time that it took one William Bruce Bailey to release a record they titled ‘Chinese Democracy’, it can be a daunting task for bands to get music out to fans quickly and easily.

Thankfully, there are newer and more direct models that musicians with some acumen — and social media skills — can use to do that one most sacred of tasks in all of musicdom:  getting the music to the people!   But of course, we can talk about a band or artist playing live that is one way to share music, and for me, that remains a critical part of the experience.  So, while playing out continues to be as important today as it ever has been, we all want to continue to encourage groups like Me & Mountains, Motel Beds, The Rebel Set, Smug Brothers, Oh Condor, and  so many other area musicians to play in the Gem City more often!  Yet it is still important to those who have heard the music to share it with others!  And we need CDs, tapes, record albums, and MP3s in order  to share the sweet nectar of musical satisfaction.

So, the gentlemen behind Me & Mountains are among those bands trailblazing new forms of fan-supported musical releases.  And in the end, it is not dependent upon some distant and disconnected record label execs wondering whether a band or song is “the right sound”, it is the initiative of the bands themselves with the support of music lovers that should lead the way for new releases.  And this model can lead to some great music ringing in the ears of fans sooner rather than later.  Add to this the successful examples of several local groups, such as The Motel Beds and Smug Brothers using different forms of distribution and you have a recipe for musical happiness all around.

So, what can you do?  You, dear music fan, can visit the KickStarter page for Me & Mountains and support their effort to release their new album, Feral on vinyl.  You can for an incredibly small effort, support great local music and stick it to the corporate model.

You can support great local music and get a copy of the Me & Mountains new album, Feral on vinyl.  You can listen and enjoy fantastic music without paying huge sums of money to someone who does not even know where Dayton, Ohio is located; much less care about the quality or integrity of the music.

It doesn’t get much better than that.