Christopher Denny – If The Roses Don’t Kill Us
Check out the powerfully voiced singer’s tunes, performed in a style he calls “Arkansas Soul”.

John Lurie National Orchestra
Archival recordings from a trio Lurie (of the Lounge Lizards) would occasionally play with on the side which quickly became its own thing.

Ben Miller Band – Any Way, Shape Or Form
The Ben Miller Band plays a unique musical stew they call “Ozark Stomp”, this one is their first release for New West Records.

Mozart’s Sister – Being
First full length album from this solo artist, who has been drawing interest for her live performances and first EP.

The sixth album from The Rosebuds, this one was recorded with
Justin Vernon and other members of Bon Iver.

Billie Joe Shaver – Long in the Tooth
First album in six years from this old timer, in peak form here.

Spider Bags – Frozen Letter
Fourth album from this band, and their first for Merge Records.
Superchunk’s Mac McCaughan guests on one track!

Spoon – They Want My Soul
First release in four years from the beloved Austin band.

Wish I Was Here – Soundtrack

Eric Clapton & Friends – The Breeze: An Appreciation of J.J. Cale 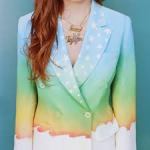