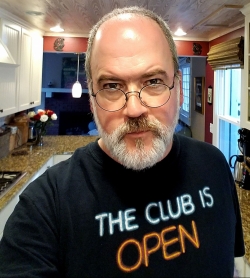 Larry was part of the Dayton-based punk musical force Lurchbox. You can hear some Lurchbox on their Soundcloud page! And we recommend that you do so!

He has been in several projects including Smug Brothers, Goodnight Goodnight as well as playing in The Last Waltz tribute project, contributing bass to the most recent DirtyClean album among other works! In this brief essay, Larry explores the influences, deep cuts and journey of rediscovery that have shaped his recent musical experiences. It is a real pleasure to have Larry share the music and songs that he has been enjoying with us.

Dr. J: What are you listening to right now?

Larry: I’ll never claim to have the weirdest preferences in music, or that my edgy taste will “blow your mind” (someone actually told me that, and they – sadly – didn’t). In conversations with other musicians over the years (and in reading through the submissions so ingeniously curated by Dr. J), I am humbled to learn that we all have our diverse reserves of “deep cuts” that have inspired and shaped us. I have been excited to discover the insights of some of my friends and heroes here, and I’m grateful for the opportunity to share some inspirations and discoveries of my own as well.

I have to start with an artist who was an early influence on my musical taste and pop instincts, and while I was a child when The Beatles were literally changing the world with their music, I came of age in my teens listening to artists who used the freshly-plowed musical landscape to nurture their inspired reactions to that revolution. So while Jeff Lynn’s tenure with the Electric Light Orchestra furthered the hook-laden, R&B/symphonic-inspired path The Beatles had ended on, a listen to his earlier work shows that he was on the same path all along, and responding in real time. Even before his time with psychedelic pop innovators The Move, Lynn’s work with The Idle Race in the late 60s displayed every bit of the playful creativity and gift for melody that would later become his hallmark. “I Like My Toys” is a perfect example of the tunesmithing that showed the Fab Four hadn’t cornered the market on stunning, seemingly effortless pop.

A lot of what I’ve been listening to lately has been a revisit to an era that I sort of skipped; while I was sold on Industrial groups like Ministry and Nine Inch Nails, I didn’t stray far from that (relatively) mainstream path. So over the years, I’ve been delving into bands I overlooked, like the legendary Killing Joke (who I could devote page after page to), Nitzer Ebb, Front 242, KMFDM, and most recently, Front Line Assembly. Because Bill Leeb had originally been in Skinny Puppy (and I was never really into their sparse take on the genre), I didn’t pay much attention but I recently stumbled across 1992’s “Tactical Neural Implant” and it opened up a whole new world for me. Still relatively minimalist from a melodic standpoint, it brings a broad range of rhythms and synthesizer textures that make me wonder what the last 30 years would have been like if I’d discovered this back then.

I also have to mention that Dayton’s own Hexadiode continues under the same electronic/industrial banner, while bringing their own darkness, passion, and inventiveness into the mix. A band whose musicality and ferociousness couldn’t really (for me) be comfortably categorized under “post-hardcore” (too progressive for punk, too jazz for metal, too melodic for industrial), was Canada’s Nomeansno, and I was fortunate to discover them at a live show in the late 80’s when band founder Rob Wright was already older than most of their contemporaries: I thought he was the band’s dad or something. But then I had my face joyfully torn off that night, and I’ve been a fan ever since. Before retiring in 2016, they recorded 10 studio albums, and there were EP’s, bootlegs, a live album, and a collaboration with Jello Biafra, but 1989’s WRONG has become my favorite.

On the emotionally polar opposite of post-hardcore is another genre that’s also consumed me off and on over the last 20-30 years: Shoegaze. I was never a fan of My Bloody Valentine (which isn’t a popular claim to stake among other shoegaze fans), and while their 1991 “Loveless” is often credited as making them pioneers of the form, I was much more drawn to melodies, as opposed to experimentation with raw noise. The Cocteau Twins’ delicate “Blue Bell Knoll” from a few years earlier in 1988 I consider a precursor, but Slowdive’s “Souvlaki” in 1993 was the defining moment for me (I also have to mention the band Ride, although at the time in the 90’s, they slipped by me altogether). A more recent (2003) entry, however, is from Andrew Saks’s project Sway, employing walls of sound thicker and more layered than anything Phil Spector could have dreamed of, and while some tracks from “The Millia Pink and Green” EP drift into MBV territory and overwhelm you with their sonic spectacle, the haunting, gorgeous track “Fall” makes it all worth the price of admission. END_OF_DOCUMENT_TOKEN_TO_BE_REPLACED

Earth and sky
The energy rolls around and surrounds you. It feels like a welcome embrace.
The passion is evident.
Let’s show support for the amazing sound engineers that make the shows we attend so good!
NeoAmerican Pioneers at @daytonsideshow at @yellowcabtavern
Notes are helpful when making radio!